Book Review - The Wild One by Ruth Cardello

She wants to go wild. A billionaire decides to go with her. For two Americans in Paris, love wasn’t in the plans in New York Times bestselling author Ruth Cardello’s sexy high-stakes romance.
After years of choosing safe over satisfying, a weeklong Paris fling sounds perfect to Wren Heath. And who better to have it with than Mauricio Romano, a billionaire with a reputation as a first-class heartbreaker. A few days. Fun, then done. What happens on vacation stays on vacation, right?
Paris was Mauricio’s playground, and love was never part of the game. Lust? Toujours. Then he meets a sweet woman who wants to be a sex kitten. He knows how to give her the wildest five days and nights of her life. No commitments. No strings. But the hotter it gets, the harder it is to remember his own rules.
What do you do when what happens in Paris stays in your heart and then shows up at home?
Are these two destined to clash or destined for love?


This has little to do about the story, but I absolutely love the character names wren and Mauricio.  The characters were pretty fantastic too.  I enjoyed getting to know Wren and her journey to figure out what she really wants to do with her life and the contrast with Mauricio who is on a similar journey.  This is the second book in this series and I have to say I'm really digging the Romano brothers.  One thing that sets this book and series apart from others is the secondary story with Dominic, a character from one of Ruth's first books, which currently seems to have little to do with the primary story, but will obviously interact in the future.  I like that it is tying the books together with more than just a common family like most romance series.

Ruth Cardello is the New York Times bestselling author of the Westerly Billionaire novels and The Broken One in the Corisi Billionaires series. She loves writing about rich alpha men and the strong women who tame them. Before becoming a novelist, Ruth was an educator for two decades, including eleven years as a kindergarten teacher. Born the youngest of eleven children in a small city in northern Rhode Island, Ruth has lived in Boston, Paris, Orlando, New York, and Rhode Island again before moving to Massachusetts, where she now lives with her husband and three children. Learn about Ruth at www.RuthCardello.com.


From neighbors to friends to lovers? All the makings of a risky second-chance romance by USA Today and Wall Street Journal bestselling author Tracy Brogan. Since Carli Lancaster’s divorce, she’s worked hard to keep life as normal as possible for her daughters. When she lands a job as cohost of a local morning show, it looks like a fresh start. So does the arrival of a handsome new neighbor, who has more in common with Carli than just a property line. Ben Chase is also new to single parenthood. And like Carli, he’s focused on the future. From navigating neighborhood gossip to decorating for holidays to reaching out in times of trouble, they quickly learn to rely on each other. Just like a couple but without the complications of coupling! Sure, there’s attraction. They’re only human. But they’re also friends, and who wants to ruin a perfect relationship with romance? They’re both thinking about adding some perks, though, and even if their new normal isn’t perfect, it’s def…
Read more 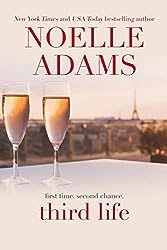