Showing posts from November, 2017
Show all


First love is better the second time around.
Matt Osborn had no idea coaching his five-year-old nephew's soccer team would get him so much attention from the mothers-attention he doesn't want now that he's given up on love and having a family of his own. Yep, Matt's the last of his bachelor buddies, and plans on staying that way. That is, until he finds himself face-to-face with the woman who broke his heart.
Single mom Anna paused her life in England to help her father recover from an illness. She can't afford complications, and too-hot-for-his-own-good Matt Osborn-her almost former fiancé-is definitely a complication. He's a reminder of what might have been-or should have been. That irresistible pull between them isn't over. Not even close. But if she's not careful, she'll break both their hearts . . . again.


I have really enjoyed the Brotherhood Bacheler series and have been looking forward to this last installment.  This turned…
Post a Comment
Read more

Book Review - Between You and Me by Jennifer Gracen 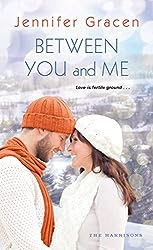 
As the only daughter of the wealthy Harrison clan, Tess Harrison has everything—except the baby she longs for. With no husband in sight, she escapes to her family’s retreat in Aspen, Colorado, visions of sperm donors dancing in her head. Instead, she finds Logan Carter. When the ruggedly handsome manager of the Harrison ski house offers to be her baby daddy in exchange for her playing his girlfriend, Tess is breathless to begin the charade. After all, the brokenhearted heiress knows better than to fall in love . . .

She would be Logan’s dream girl, if his dark past had left him with any dreams. Now the brooding bachelor’s only hope is to satisfy his mother’s dying wish to see him happily paired off—and give lovely Tess the baby she longs for.  But when he and Tess opt to make a baby the old-fashioned way, he’s fighting hard against the longing to hold on to the elusive Harrison beauty forever . . 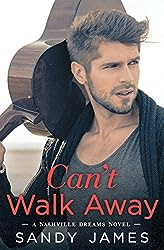 
In Nashville the stars shine a little brighter, songs sound a little sweeter, and love lasts a lifetime.Young, rich, and better looking than a man has a right to be, successful songwriter Brad "Hitman" Maxwell was once Nashville's biggest celebrity. Then a heartbreaking loss and a shocking betrayal caused his light to go out. Now, instead of pouring his soul into song, he pours beers at Words & Music. His bar is the perfect escape--a place to forget his past--until the night she takes the stage...Savannah Wolf used to dream of becoming Nashville's hottest star. Now, as a young single mom, she dreams of a steady income and being home to tuck her daughter into bed. So when Brad Maxwell offers her the gig of a lifetime--playing as the headliner at Words & Music--Savannah discovers the best of both worlds. And she refuses to ruin this opportunity by falling for her sexy boss. Except that Brad suddenly starts writing music again... music inspired by …
Post a Comment
Read more 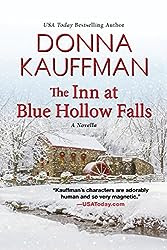 
Stevie Franklin is ready to go all-out Grinch on Christmas this year, but a snowy trip to the Blue Ridge Mountains could provide some unexpected gifts...

Stevie is thrilled to help her best friend Sunny launch her new greenhouse business in Blue Hollow Falls. Not only does it give her a chance to visit the quaint location, but it’s a welcome distraction from Stevie’s recent bad luck with men. Just one catch: since Sunny’s home is under renovation, Stevie must stay at the local inn, whose amenities feature hunky innkeeper, Noah Tyler.

Noah may be as tempting as her grandmother’s famous sweet potato pie, but city-girl Stevie isn’t sticking around—and she doesn’t do flings. Yet when Noah’s chef gets stranded in a Christmas Eve snowstorm, Stevie can’t resist pitching in and serving up some of her family’s favorite recipes. The magic of a Blue Ridge Christmas is already rekindling Stevie’s holiday spirit and making her wonder what else she might be missing out on. Now can Noah …
Post a Comment
Read more

Book Review - Once A Charmer by Sharla Lovelace 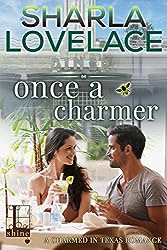 
Charmed, Texas, is a close-knit small town where people’s dreams of love can come true. That’s not to say that some people aren’t still waiting, and dreaming . . .

By day, Allie Greene stays busy with her family diner, and keeping tabs on her teenage daughter. What’s really exhausting Allie, however, are the nights. Not that she minds Bash Anderson unbuttoning her naughty desires—if only in her dreams. But what was he doing there at all? He’s her best friend, and a father figure to her girl. Talk about awkward. Talk about OMG-heat-and-fireworks that are flipping fifteen years of normal upside down. And now, when Allie needs him as a friend more than ever, logic doesn’t stand a chance against his lips and irresistible deep-blue eyes . . .

Sure, Bash has fantasized about Allie, but there’s no way he’d act on it. She and her daughter are the closest thing to family he’s ever known. With the exception of one drunken moment fifteen years ago, he and Allie have stayed on this si…
Post a Comment
Read more 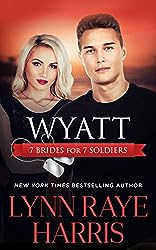 
Fall in love with seven sexy and irresistible soldiers who find their courage and heart tested like never before in the battle for love! This multi-author collaborative series of contemporary romance novels is brought to you by bestselling authors Barbara Freethy, Roxanne St. Claire, Christie Ridgway, Lynn Raye Harris, Julia London, Cristin Harber and Samantha Chase. You won't want to miss a single one! WYATTNavy SEAL Wyatt Chandler loves the pulse-pounding, adrenaline-spiking tempo of Special Ops. But when a teammate dies in his arms during a mission gone wrong, he decides it’s time to hang up his combat boots before he becomes the next casualty. He can’t let his grandmother—the woman who raised him after his parents died—go through that kind of pain ever again. But going home isn’t as easy as it sounds, and he has no idea what to do now that he’s no longer HALO-jumping into enemy territory. When he gets a chance to use his skills and play bodyguard to an heiress, h…
Post a Comment
Read more

Book Review - Up for Heir by Ruth Cardello 
New York Times and USA Today bestselling author Ruth Cardello puts two hearts on the line when a Boston billionaire takes a second chance on the woman of his dreams. Spencer Westerly is his own man. He didn’t need his father’s money to build his wildly successful tech company—and he doesn’t want to deal with the fallout from old family secrets. But as much as Spencer wants to avoid Westerly drama, his grandmother—the family matriarch—is determined to pull him back into the fold. And she’s discovered the perfect lure: his college sweetheart, Hailey. Although she broke his heart, Hailey is still the only woman he’s ever loved. Now that she’s back and looking as desirable as ever, Spencer is determined to get a second chance. A lot has changed for Hailey Tiverton. The only thing that hasn’t? The inexplicable pull she feels toward Spencer. When they were younger, his work was his priority. Now, he’d better be willing to prove that, this time, love comes first…
REVIEW

Book Review - An Ex for Christmas by Lauren Layne

Named Best Book of the Month by Amazon

She’s making a list—and checking it twice. But is there a nice guy among all her naughty exes? The New York Times bestselling author of Blurred Lines returns with a charming friends-to-lovers rom-com.

When a psychic tells spunky, superstitious Kelly Byrne that she’s already met her true love, she becomes obsessed with the idea of tracking him down before Christmas. Kelly immediately writes up an “Ex List” and starts contacting old boyfriends to figure out which one is the one. When her college sweetheart rolls into town, Kelly convinces herself that they’re meant to be. The trouble is, sparks are flying with someone she’s never given a chance: her best friend, Mark.

Mark Blakely has watched the guys on Kelly’s list break her heart, and he’s not looking forward to watching them do it all over again. Mark’s always been there for her, but the timing’s never worked out for the…
Post a Comment
Read more
More posts