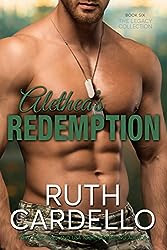 Alethea is at a crossroad. For as long as she could remember, it was her and her best friend, Lil, against the world. Now that Lil has met Prince "I have my own helicopter" Charming and reconnected with her family, Alethea is on the outside looking in, justifying who she's always been to people who have never understood her. When she uncovers a looming threat to Lil's family, she's determined to save them, even after they tell her not to get involved and assign their best man to stop her.

Marc Stone has been watching Alethea ever since she waltzed through his security system and right into his late night fantasies. As a decorated Marine, he's seen war, but nothing could prepare him for this wild redhead. Strong. Beautiful. Flawed, and fiercely protective. Hard to love, and impossible to deny.

If she'll stop fighting him long enough, he'll show her just how perfect they are for each other. That is, if she doesn't get them both killed first.