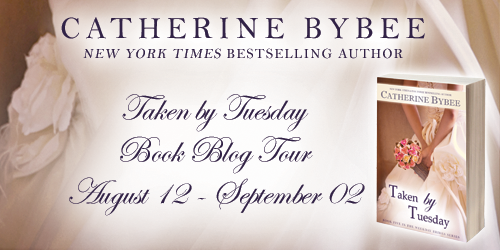 JUDY GARDNER:
College graduate Judy stands ready to conquer the world…if she can find a job. Hoping to transition from aspiring architect to famous architect as quickly as possible, the dark-haired beauty moves to LA, staying in the home of her celebrity brother, Michael Wolfe. But it’s hard for Judy to focus on work when the sexy bodyguard she fell for last summer keeps showing up in her life and leaving her breathless.

RICK EVANS:
With his hard body, green eyes, and easy smile, Rick could have any woman he wants. But the Marine-turned-bodyguard only has eyes for Judy and her spitfire attitude. When a faceless villain attacks Judy, Rick will stop at nothing to protect the woman who opened his heart from the monster hunting her.

PRAISE FOR TAKEN BY TUESDAY

“Readers will fall in love with Rick, who is the ultimate book boyfriend with his good looks and bad-ass attitude.”  –RT BOOK REVIEWS, TOP PICK!, 4 ½ STARS

Judy and Rick have an undeniable chemistry that began in the previous book in this series.  That book is not necessary to read prior to this one, but would be helpful for a new reader to understand these characters backgrounds better.  Since the whole series has been enjoyable, I’d recommend just going back to the first book and working your way through to this one, I promise you’ll get through them in no time.

The story and the characters are well crafted, and the hint of mystery helps keep the book moving.  Anyone who loves Contemporary Romance will love this book.

New York Times & USA Today bestselling author Catherine Bybee was raised in Washington State, but after graduating high school, she moved to Southern California in hopes of becoming a movie star. After growing bored with waiting tables, she returned to school and became a registered nurse, spending most of her career in urban emergency rooms. She now writes full-time and has penned the Weekday Brides Series and the Not Quite Series. Bybee lives with her husband and two teenage sons in Southern California.