Showing posts from 2014
Show all

Jenn Avery's Favorite Books of 2014 That Touch of Magic by Lucy March I absolutely love everything by this author (and her alter ego Lani Diane Rich).    These characters are smart, charismatic, and real.    The mix of romantic comedy, mystery, and supernatural make this one of the best stories I ready all year.    The Heist by Janet Evanovich This is the first book in the Fox and Chase series.   The dialogue is smart and hysterical.   Three books and two short stories have already been released, and I recommend all of them.   This is also a series that is possibly better in audiobook. Beside Your Heart by Mary Whitney This is the first book in a three-book arc plus a companion book.   I recommend anything written by this author, but this series is my favorite.   The writing is smart and funny.   I don’t often laugh or cry when reading, but these books made me do both, multiple times. The Law of Attraction by N.M Silber Another first book
Post a Comment
Read more

Book Review - Forever With Me by Kristen Proby 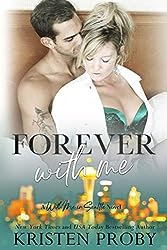 ABOUT THE BOOK Dominic Salvatore seemingly has everything a man could want. He’s found a new relationship with his father and the entire Montgomery family. His vineyard, Cuppa di Vita, is a success. There’s only one thing that eludes him: a certain driven, intelligent, and sexy as hell blonde named Alecia. Alecia works tirelessly building her event planning business. It’s the most important part of her life. Despite the beautiful, lavish weddings she organizes, Alecia is convinced that the idea of true love is a myth. While Dominic is a sexy, intriguing man, welcoming the handsome Italian into her bed, and her life, is a risk she’s not so sure she’s willing to take. However Dominic isn’t used to taking no for an answer, and it’s not long before these two are burning up the sheets and discovering a connection that neither can deny. But will it be strong enough to last forever? “I’m going to eventually make you understand how amazing you are,  tesoro .” – Dominic Salvatore RE
Post a Comment
Read more

ABOUT THE BOOK New York Times  bestselling author   Susan Mallery returns with a Christmas-themed retelling of her beloved story,  The Wedding Ring Promise ! In her youth, Molly Anderson couldn't help crushing on gorgeous bad boy Dylan Black-even though he had eyes only for her older sister. When things didn't work out between them, he said goodbye to Molly as well, vowing they'd have a great adventure when she grew up. Years later, dumped by her fiance just before Christmas, she's finally ready to take Dylan up on his promise. A guarded Dylan always had a weakness for Molly, and when she waltzes back into his life—grown-up and gorgeous—he's stunned. So why not whisk her away for some no-strings-attached fun? Laughter-filled days and late-night kisses are changing Molly's life, for good. The only gift she truly wants now is Dylan's love, but when he discovers the secret she's been keeping, she may lose him again…this time forever. REVIEW
Post a Comment
Read more 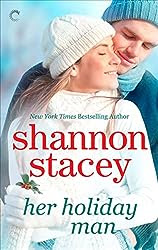 ABOUT THE BOOK Christina Forrester is starting over. After a financial scandal sent her ex-husband to prison, she's left raising her young son without any of the comforts of their old life. Budgets, coupons, lawn care—you name it, she's learning to do it all on her own. Well, almost on her own—she'd be lost without Gail Broughton, the kind widow across the street. But when Gail's son comes home, Christina's vow to never trust a man again is put to the test. Will Broughton left town because he was tired of being "that poor man" who lost his wife and unborn child in a tragic accident. But years have passed and, with his dad gone and his mom alone, it's time to go home. Only his mother's not alone. She's taken Christina under her wing, and the beautiful and determined single mother awakens something in Will he thought was buried forever. As Will and Christina are forced to spend more time together, feelings that are more than neighborly grow be
Post a Comment
Read more

Naughty & Nice ***LIMITED EDITION brought to you by 11 NYT & USA Today Bestselling Authors*** Grab it before it is gone. Over 1000 estimated pages. Amazon http://amzn.to/1CYI0Zn Amazon UK http://amzn.to/1qjMzFQ Itunes http://bit.ly/1sazim9 Google Play: https://play.google.com/store/books/details?id=3VvPBAAAQBAJ Kobo http://bit.ly/ZX1XSo Mine For Christmas by J. S. Scott Will the emotional distance between a married couple with an infant daughter tear the two lovers apart? Or will a precious gift from Santa help them heal their misunderstandings and have the merriest Christmas they’ve ever had? Web: http://www.authorjsscott.com Facebook: http://www.facebook.com/authorjsscott Twitter: @authorjsscott For updates on new releases, sales and giveaways please sign up for our Newsletter by going to: http://eepurl.com/KhsSD Twelve Days Of Temptation by Ruth Cardello Kate Hale is about to find out what happens when you ask Santa Claus
Post a Comment
Read more 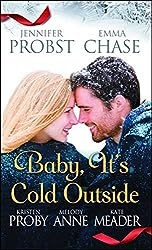 ABOUT THE BOOK BABY, IT’S COLD OUTSIDE New York Times and USA TODAY bestselling indie authors Jennifer Probst, Emma Chase, Kristen Proby, Melody Anne, and debut author Kate Meader come together to write a sizzling romance anthology. Outside it may be frosty, so turn the heat way up with these stories of desire! Can a determined woman executive and a playboy billionaire survive being stranded together in a snowstorm? Jennifer Probst depicts an encounter almost too hot to handle… Drew and Kate play an encore to Tangled in this sexy take on a “Christmas Carol” by Emma Chase. When a Christmas Eve argument condemns Drew to a troubled night, three dream women teach him that no gift could be more tantalizing than Kate… With Kristen Proby, ski slopes are quite delightful. Grace Douglas is sure she’ll never learn to ski, but instructor Jacob Baxter could teach her lessons of a different kind… Can a southern California transplant survive Montana’s deep snows? Melody Anne, author
Post a Comment
Read more

Purchase Link AMAZON   Synopsis Once upon a time, a good girl who wanted to be naughty, met a naughty boy who wanted to be good... Beth Pierce, is the Director of Fundraising for her older brother's new legal non-profit. She spends her weekends fighting off lecherous men at charity galas and her weekdays trying to hide her attraction for a certain sexy young attorney in her office. Mark Patterson, is the object of Beth's desire. He spends his weekends having casual encounters with women and his weekdays trying not to think about how gorgeous, smart, and sexy Beth is. Because not only is Beth his colleague, she's the younger sister of one of his closest friends. When Mark is assigned to escort Beth to those weekend galas, they both quickly realize that things could get very interesting. Will Beth be as naughty as she would like to be? Can Mark be as good as he wants to be? Even if they give in to their desire for each other, how can they risk romance when s
Post a Comment
Read more

Book Review - The Truth About Love by Sheila Athens 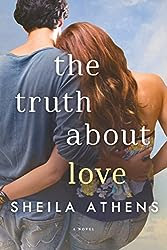 ABOUT THE BOOK Strong Convictions After her testimony sent an innocent man to prison, law student Gina Blanchard vowed to spend her life righting that wrong. She passed up more prestigious opportunities to intern at a Tallahassee nonprofit dedicated to overturning wrongful convictions. But when she catches the eye of sexy green-eyed hunk Landon Vista, she realizes there’s room in her hardworking life for a little fun. Then she learns her newest case involves the man accused of murdering Landon’s mother…and possibly setting him free. Stronger Passions The people of Tallahassee still see Landon Vista as their golden boy and football hero…and as the man who tragically lost his mother. Yet Landon hides his emotional scars behind his handsome smile. While working for a senator who’s tough on crime, he finds himself keeping an eye on gorgeous redheaded Gina in more ways than one. But as their passion simmers, their secrets build…until Gina’s latest case collides with Landon’s he
Post a Comment
Read more

Book Review - Not Quite Forever by Catherine Bybee 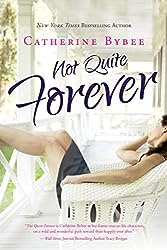 ABOUT THE BOOK The touching and heartwarming fourth novel in the wildly popular Not Quite series from  New York Times  bestselling author Catherine Bybee. Romance author Dakota Laurens believes that happily-ever-afters exist only between the covers of her sexy novels. But to her surprise, she finds a real-life hero when she meets a handsome emergency room doctor. The outspoken author feels an instant and intense attraction to Dr. Walt Eddy, and the feeling is mutual. When the globetrotting doctor pulls a disappearing act on Dakota, she’s prepared to write him off…until fate brings a blindsiding twist to her story. Still scarred from a past tragedy, Walt may have disappeared on Dakota, but now he’s determined to win her back. For the first time in years, he knows he’s ready for a new chance at love. Yet between Dakota’s doubts and two sets of meddling parents, can the once-blissful couple finally create the bright, loving future they desperately want? REVIEW Catherine By
Post a Comment
Read more

Purchase on Amazon:  http://amzn.to/1wOqBAV Purchase on iBooks:   http://bit.ly/1nytkMN A man dances the same way he fucks. His stamina, his rhythm, the slow grind of his hips. Some people are born to it, others learn through years of careful study. And dancers? We do it best of all. The moment I saw her, I knew. Her innocence is intoxicating. My lust is fierce. Primal. To watch her dance is to know the torment of true temptation. She will be mine. THE DIRTY DANCING SERIES RELEASE DATES: FIRST POSITION -- 11/5 SECOND POSITION -- 11/12 THIRD POSITION -- 12/1 About Melody Grace  Melody Grace is the New York Times bestselling author of the Beachwood Bay series. A small-town girl turned SoCal beach lover, after spending her life with her nose in a book, she decided it was time she wrote one herself. She loves steamy romance novels, happily-ever-afters, and lusting after fictional menfolk. She is author of USA Today &
Post a Comment
Read more

Title: 12 Days of Temptation – Book 1 Temptation Series Author:   Ruth Cardello Release date: 11/04/2014 Book description: From NY Times & USA Today Bestselling Author, Ruth Cardello:  Twelve Days of Temptation (A Hot Holiday Novella)  How far would you go if you were offered a chance to fulfill your secret fantasies?  What would you ask someone to do, if you knew they’d do anything?  After the death of her mother and the abrupt end of her marriage, Kate is desperately unhappy to be spending the upcoming holiday season alone. She vents her frustration in a letter to the one man her mother raised her to believe in—Santa Claus. This year she is rebelliously requesting something guaranteed to raise his eyebrows.  Brock Foster has wanted Kate since they were in high school. When he finds her letter, her Christmas wish becomes his obsession. Winning her will require skill and deception. Brock initiates a game that will bring them together and tear
Post a Comment
Read more
More posts