Showing posts from July, 2020
Show all

Book Review - Home to Me by Catherine Bybee 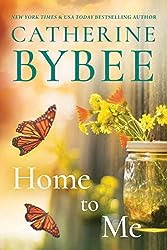 ABOUT THE BOOK A brave woman’s flight from the past leads her toward new love in a novel about courage, hope, and second chances by Catherine Bybee,  New York Times  bestselling author of  My Way to You . After Erin Fleming escapes from her controlling and abusive ex, she finds refuge in the heart of Santa Clarita, California. Eager to start over, she has a new name, a new look, and a new career. Settled into a private guesthouse, Erin can breathe free. Far from the shadows she’s outrun, Erin is finally learning to live for herself. Her new unexpected friendship with her landlord starts to crack open the armor Erin’s enclosed herself in. But it’s Matt who speeds up the pace of Erin’s heart and makes her wish for things she believes she can never have. Matt Hudson, a firefighter in one of California’s wildfire epicenters, has a passion for danger. He lives for the adrenaline rush his profession awards him. But his protective instincts take over once Matt meets Erin. So does an attract
Post a Comment
Read more
More posts