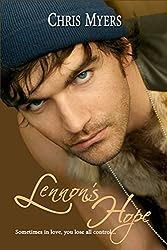 Sometimes in love, you lose all control…

At age ten, Rain fell hard for the sweet boy caring for his sister.
At age eighteen, she runs into Lennon, now an experienced player and no longer the innocent boy she once loved.
At age nineteen, she has to put all her plans on hold to have his baby, and under a cloud of deception, she faces tragedy and heartbreak.

At age ten, Lennon proposed to Rain in front of the whole school.
At age eighteen, he thought he was over her until he sees her at a party, no longer a little girl but all grown-up and sexy as hell.
At age nineteen, he loses what he cherishes most.


Lennon’s Hope was a satisfying conclusion to a great series, but it should be noted that this was much steamier than the previous books.   This was an emotional read with many unexpected twists and turns.  The character development as the characters matured physically and emotionally was very well done.

I would recommend this to anyone who loves New Adult romances or can just appreciate a really good love story.

Chris Myers spends most of her free time writing and dreaming up new characters who fight each other for page time. She is an award-winning author of three published novels: LENNON'S JINX, first in a New Adult romance trilogy, and DATE WITH THE DEAD and DEAD AND MISSING, first two in a YA paranormal mystery series.

Previous blog tours resulted in outstanding reviews. Chris's work has appeared in the NewsMag and has earned several awards including first place Paul Gillette, Colorado Gold finalist, and semi-finalist in the Amazon Breakthrough Novel Award. She has taught writing workshops for PPW and Delve Writing and was an adjunct professor at CSU. She earned a Masters from the University of South Florida.