Showing posts from May, 2017
Show all

Book Review - The Last in Love by Terri Osburn

By Jenn Avery - May 30, 2017
ABOUT THE BOOK Abby Williams lost her husband—and the future she envisioned—to a roadside bomb in a foreign land, so a kitchen fire is no big deal. When the local firemen show up to put out the blaze, the army widow finds herself attracted to one hot volunteer firefighter…until she realizes it’s Justin Donovan, a man five years her junior. Justin has long carried a torch for Abby. But after she got married ten years ago, he put her out of his mind, left Ardent Springs for Chicago, and got a job as a real estate developer. Now he’s back—for reasons he’d rather not share—and he wants to prove to Abby that age is nothing but a number. Will Abby’s reluctance and Justin’s secrets extinguish any attempts at romance? Or will the sparks between them ignite a second chance at love? REVIEW I have loved the Ardent Springs book and the characters have been so much fun to get to know.  Abby hasn't always been the easiest to like but definitely easy to sympathise with up to this poin
Post a Comment
Read more 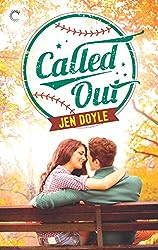 ABOUT THE BOOK Jen Doyle is back with another hot and heartfelt home run of a contemporary romance. Fans of Jill Shalvis should prepare to swoon over Jack and Lola's HEA.   Jack "Ox" Oxford is used to being alone. Granted, when you screw over your friends, being alone isn't always a choice. Playing for the Chicago Watchmen is a last-ditch effort to save his career…and right some of his past wrongs. He's not expecting a warm reception, but he's also not expecting a flat tire to change everything.  Recovering control freak, single mom and semiprofessional chaos wrangler Lola Deacon McIntire doesn't need an arrogant ballplayer to swoop in and save her from anything, much less her flat tire. And she definitely doesn't need her body to betray her and decide  this  is the guy to wake up her rusty libido. She isn't about to upset her sons' lives for any man—much less one who so clearly doesn't think he's dad material.  Jack never tho
Post a Comment
Read more

Book Review - In the Heir by Ruth Cardello (Free on Amazon Unlimited!) 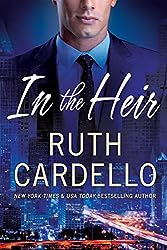 ABOUT THE BOOK New York Times  and  USA Today  bestselling author Ruth Cardello returns with an irresistible series about sexy billionaires and the strong-willed women who tame them. Brett Westerly is his father’s golden child, but it’s come at a cost. As head of the family corporation, he throws himself into his work—hiding in his office is easier than confronting the reality of his broken family. After a bitter divorce that split the family and divided loyalties, the wealthy Westerly matriarch offers an early inheritance to any grandchild who marries and invites the  entire  family to the wedding. Brett’s brother Spencer rashly gets engaged, and Brett knows it’s his duty to intervene. But he never imagined the unwelcome desire Spencer’s fiery fiancée would spark in him. Now the man who’s used to getting everything he could want has met the one woman he can’t have. Ever since she was a girl, Alisha Coventry considered Spencer and his sister Rachelle the family she didn’t hav
Post a Comment
Read more 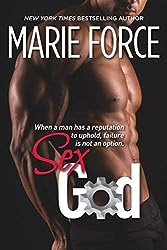 ABOUT THE BOOK A sizzling hot stand-alone contemporary romance! I inherited a life I never intended to live. I've upheld my responsibilities admirably. And I’ve taken care of my own needs privately... I'm biding my time until I can get the hell out of here. But I didn’t count on having unfinished business With one of my very best friends… When a man has a certain “reputation" to uphold, There can be no unhappy customers left behind. Lauren is a loose end that won’t be tied up no matter how hard I try. And I try hard. Really, really… hard.  Sex God is the much-anticipated follow-up to Sex Machine .  Goodreads : http://geni.us/sggood ----------------- SEX MACHINE is currently on sale for .99 cents!  Kindle: http://geni.us/SGamz iBooks: http://geni.us/SGib Nook: http://geni.us/SGnook Kobo: http://geni.us/SGkobo Google: http://geni.us/SGgoogle REVIEW This is a great seq
Post a Comment
Read more 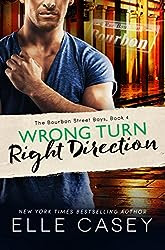 ABOUT THE BOOK Tamika Cleary takes a wrong turn up a one-way street—and straight into Thibault Delacroix’s leg as he steps into the road. But Mika’s in a hurry, and she certainly doesn’t have time for a guy who can’t even look both ways before crossing, even if he does have a cute face, a body to die for, and the darkest, thickest eyelashes she’s ever seen. Unfortunately for Mika, fate has other ideas. When she’s threatened by her employer, a Russian mafia boss known as “The Thief”, she’s forced to accept Thibault’s help. As the co-owner of the Bourbon Street Boys security firm, he believes he can keep her safe. But Mika has a whole load of trust issues—and the pushier Thibault is about helping, the more stubbornly she tries to resist. Mika may have taken a wrong turn the day they met, but will she finally let someone steer her in the right direction? REVIEW Wrong Turn, Righ Direction is a light hearted Romantic Comedy.  At least as light hearted as a "I didn't kn
Post a Comment
Read more

Today we are celebrating the release of SEX GOD, a sizzling hot stand-alone contemporary romance title by Marie Force. Check out the purchase links for the book below. The previous book in this standalone series, Sex Machine , is just .99¢ for a limited time, so make sure you grab it while you can!   SEX GOD by Marie Force A Standalone Contemporary Romance!   Book Blurb: A sizzling hot stand-alone contemporary romance!   I inherited a life I never intended to live. I've upheld my responsibilities admirably. And I’ve taken care of my own needs privately... I'm biding my time until I can get the hell out of here. But I didn’t count on having unfinished business With one of my very best friends…   When a man has a certain “reputation" to uphold, There can be no unhappy customers left behind. Lauren is a loose end that won’t be tied up no matter how hard I try. And I try hard. Really, really… hard.   Sex God is the much-anticipated
Post a Comment
Read more 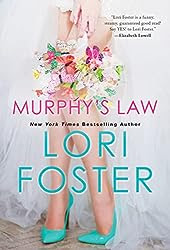 ABOUT THE BOOK ANYTHING THAT CAN GO WRONG. . . Nothing  is going to go wrong. Ashley Miles has worked too hard for her independence to let some Bentley-driving hunk named Quinton Murphy interfere with her plans—or her freedom. Yes, the chemistry is phenomenal. Kind of scary, actually. But that’s it. NO emotional commitments. . . .WILL But he’s SO wonderful—a woman could fall in love . . . How did that happen? That wasn’t part of the plan! But can she trust him?  Really  trust him? The man is just  so  mysterious. There’s only one solution: put it all on the line and see what Quinton does when she tells him how she feels. And hope everything that can go wrong. . .won’t. . . REVIEW Our heroine, Ashley has a plan to make something of herself and no-one is going to stop her from escaping the poverty of her past.   Unfortunately, Quinton didn’t get that memo and pursues her like he has no other.    Ashley doesn’t understand why her sarcastic wit and aloofness isn’t drivi
Post a Comment
Read more 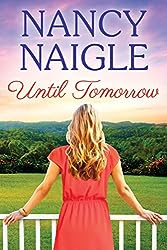 ABOUT THE BOOK After yet another heartbreak, Flynn Crane is pretty much done with dating. She’s not even sure she can keep her grandparents’ struggling bed-and-breakfast afloat. But just as she’s about to give up on both her business  and  her dream of settling down in Boot Creek, Ford Morton walks back into her life. Even from thousands of miles away, Ford never forgot the spark that ignited when he first met Flynn. Now a monthlong artists’ residency near Boot Creek gives him the perfect opportunity to find out just  how  intense the fire between them can get. Neither of them expected just how that little spark would turn into heated passion. With Ford’s return to Alaska looming near, Flynn is torn between her life in Boot Creek and a chance to move to the wilderness for love. Can Ford and Flynn find a way to share tomorrow together—before they both lose their hearts in Boot Creek? REVIEW This is a nice cute rom-com that is the third book in the series.  One of the thin
Post a Comment
Read more 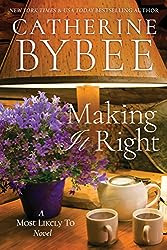 ABOUT THE BOOK In the final book in bestselling author Catherine Bybee’s Most Likely To trilogy, River Bend’s rebel follows in her father’s footsteps to become sheriff. But it might be time to forge her own path… Some kids inherit a family business; Jo Ward inherited a badge. Once voted Most Likely to End Up in Jail, the town wild child has become sheriff—hell-bent on uncovering the truth about her father’s mysterious death. Life is quiet in rustic River Bend, but Jo longs for something beyond her small hometown and the painful memories it holds. All that keeps her sane is the support of her best friends, Melanie and Zoe. But when Jo signs up for an expert law enforcement training seminar, she meets Gill Clausen, whose haunting eyes and dangerously sexy vibe just may challenge her single-minded focus. Commitment-phobic Jo can’t deny her attraction to the arrogant federal agent, and when odd things start happening around River Bend and danger surrounds her, she realizes she’ll n
Post a Comment
Read more

The Playboy Bachelor (The Bachelors of Arizona) by Rachel Van Dyken 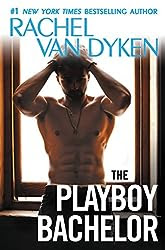 ABOUT THE BOOK She's no Sleeping Beauty. And he's definitely  no  prince . . .  Margot McCleery could have lived her whole life without seeing Bentley Wellington again-her ex-best friend and the poster boy for Hot, Rich Man-Whores everywhere. But Margot's whiskey-augmented grandmother "buys" Bentley at a charity bachelor auction, and now suddenly he's at her door. Impossibly charming. Impossibly sexy. And still a complete and utter jackass. Bentley's just been coerced by his grandfather to spend the next thirty days charming and romancing the reclusive red-haired beauty who hates him. The woman he abandoned when she needed him the most. Bentley knows just as much about romance as he knows about love- nothing . But the more time he spends with Margot, the more he realizes that "just friends" will never be enough. Now all he has to do is convince her to trust him with her heart . . . REVIEW This is the second installment in The Bachelo
Post a Comment
Read more
More posts