Showing posts from April, 2017
Show all

Book Review - Virgin for the Trillionaire by Ruth Cardello

ABOUT THE BOOK They’re at it again! Ruth Cardello, JS Scott, and Melody Anne come together for another royal novella trilogy. This is the first novella of a three novella set. Check the dates below for release dates on the second and third novella. Escape with three new princes as only these NYT’s bestselling authors could write them. Virgin for the Trillionaire: Ruth Cardello (April 25, 2017) Virgin for the Prince: J.S. Scott (June  6, 2017) Virgin to Conquer: Melody Anne (July 3, 2017) The wild ride begins with Virgin for the Trillionaire: Prince Ballasare Stephan Demande needs a bride before his thirtieth birthday or he’ll lose his crown. Unlike their barbarian twin island, Rubare Virgina’s royal family is above kidnapping and murdering as a means of choosing their queens. Historically, they’ve cultivated their own selection, ensuring the purity and perfection of each. Prince Ballasare wants more, so he comes up with a plan. It’s genius really. He invites three hundred o
Post a Comment
Read more

ABOUT THE BOOK What's wrong with a little white lie? There are a lot of things Ali Marshal doesn't do: pink anything, a day without chocolate, and Hawk, her sister's ex-husband. Sure, he's a sexy former NHL star who can make her pulse pound with just a wink. But he belonged to Bridget first. And no matter how long she's had a crush on him, how great he's always been to her dad, or that her sister is engaged to someone else now and Ali needs a date to their engagement party, she can't give in to temptation. Can she? It's been years since his disastrous marriage crashed and burned, and Bradley Hawk has finally moved on. So when Bridget blows back into town with her new fiancé, throwing the engagement party of the year, he could care less . . . until Ali tells one little lie that lands him smack dab in a fake relationship. After one promise to be Ali's date and two of the hottest kisses he's ever had, Hawk can't deny how much he wants her.
Post a Comment
Read more

ABOUT THE BOOK Wall Street Journal  bestselling author Tracy Brogan is back with a sweet, hilarious series about family, forgiveness, and what it means to go back home. Emily Callaghan never expected to spend another summer on Wenniway Island. Yet here she is, back in her quaint northern Michigan hometown of Trillium Bay, divorced, flat broke, and dragging along her precocious twelve-year-old. It’s a simple arrangement: Emily, a house flipper, will renovate one of her grandmother’s rental properties in exchange for a much-needed loan. Once a wild child, the reformed Emily also hopes to remodel her reputation and show her family she’s all grown up. But coming home is never simple. Emily’s dad is more distant than ever. Her younger sister is dating a much older man, and Emily’s worried it’s a mistake. The cottage remodel grows increasingly daunting. And then there’s handsome out-of-towner Ryan Taggert… Ryan has his own family drama. A smart, ambitious land developer, he’s
Post a Comment
Read more

ABOUT THE BOOK Description Sparks fly between a misunderstood New York socialite and a cynical divorce lawyer in this lively standalone rom-com from the  USA Today  bestselling author of  Blurred Lines  and  Love Story . Pampered heiress Georgianna Watkins has a party-girl image to maintain, but all the shopping and clubbing is starting to feel a little bit hollow—and a whole lot lonely. Though Georgie would never admit it, the highlights of her week are the mornings when she comes home at the same time as her uptight, workaholic neighbor is leaving to hit the gym and put in a long day at the office. Teasing him is the most fun Georgie’s had in years—and the fuel for all her naughtiest daydreams. Celebrity divorce attorney Andrew Mulroney doesn’t have much time for women, especially spoiled tabloid princesses who spend more time on Page Six than at an actual job. Although Georgie’s drop-dead gorgeous, she’s also everything Andrew resents: the type of girl who inherited her pe
Post a Comment
Read more

Book Review - If Not For You

ABOUT THE BOOK An emotionally stirring novel that shows how obstacles can be overcome, differences can be strengths, and sometimes a choice can seem wrong even though it’s absolutely right   If not for her loving but controlling parents, Beth Prudhomme might never have taken charge of her life and moved from her native Chicago to Portland, Oregon, where she’s reconnected with her spirited Aunt Sunshine and found a job as a high school music teacher. If not for her friend Nichole, Beth would never have met Sam Carney, although first impressions have left Beth with serious doubts. Sam is everything Beth is not—and her parents’ worst nightmare: a tattooed auto mechanic who’s rough around the edges. Reserved and smart as a whip, Beth isn’t exactly Sam’s usual beer-drinking, pool-playing type of woman, either.   But if not for an awkward setup one evening, Beth might never have left early and been involved in a car crash. And if not for Sam—who witnessed the terrifying ordeal, rushed to
Post a Comment
Read more

ABOUT THE BOOK A new standalone romance from New York Times Bestselling Author Lynn Raye Harris. Sexy, action-packed, and thrilling! Tell Dex I’m sorry. I shouldn’t have let it go this far. I’ve thought for a while that marrying him wasn’t right, that I’m not the woman for him—I should have been brave enough to say so. He deserves more.  When Dex “Double Dee” Davidson was abandoned at the altar by the woman he loved, he threw himself into his military career, training hard enough to get accepted into the elite Black Ops unit known as HOT. The love he felt for Annabelle Quinn burned to ash in the face of her betrayal—so when she crashes back into his life and begs him to save her, he has no problem laughing in her face.  Blackmailed into jilting Dex and forced into an abusive marriage, Annabelle never thought she’d escape the hell of the last five years. But her husband died a month ago and she’s finally free. Except she isn’t. Someone claims that Eric stole a fortune—and they w
Post a Comment
Read more

Book Review - A Girl's Guide to Moving On

ABOUT THE BOOK In this powerful and uplifting novel from #1  New York Times  bestselling author Debbie Macomber, a mother and her daughter-in-law bravely leave their troubled marriages and face the challenge of starting over. Leaning on each other, Nichole and Leanne discover that their inner strength and capacity for love are greater than they ever imagined. When Nichole discovers that her husband, Jake, has been unfaithful, the illusion of her perfect life is indelibly shattered. While juggling her young son, a new job, and volunteer work, Nichole meets Rocco, who is the opposite of Jake in nearly every way. Though blunt-spoken and rough around the edges, Rocco proves to be a dedicated father and thoughtful friend. But just as their relationship begins to blossom, Jake wagers everything on winning Nichole back—including their son Owen's happiness. Somehow, Nichole must find the courage to defy her fears and follow her heart, with far-reaching consequences for them all. Lea
Post a Comment
Read more 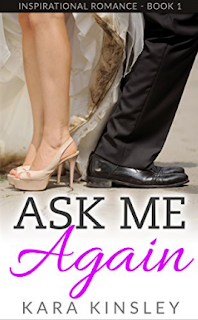 ABOUT THE BOOK This is Book 1 of the 3 book "Ask Me Again" series. Devin Grant had his future all figured out. Fight fires in his hometown until he could save the money to go off to college and become an Arson Investigator. He was going to leave his small town behind for something bigger and better. Until someone from his past walked back into his life. Tricia Green had dreamed of leaving her run of the mill small town for as long as she could remember. All she wanted was to get away from the dead end life she lived with her alcoholic mother and never present father. More than anything, she wanted to head off to college and pursue her dream of being a physical therapist. But fate had other plans. Plans that would change her life forever.  REVIEW Lately, I have been thinking a lot about first kisses, because that is what you do when you spend your time watching Netflix shows based on YA novels.  In every good first kiss, there is a moment where you're taken abac
Post a Comment
Read more
More posts