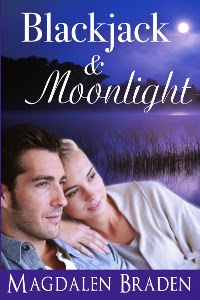 A super-sexy judge has to declare his love for the lawyer of his dreams before he’s even met her.

Jack “Blackjack” McIntyre, Philly’s superhero judge, meets his match when Elise Carroll appears. Trouble is, she’s a lawyer in his courtroom. Stating his feelings for the court record isn’t the way to start a relationship… particularly with a woman who thinks “love at first sight” is as real as the tooth fairy.

Elise wants nothing to do with Blackjack’s potent charm and alleged romantic feelings. Still, men leave when they’ve gotten what they want… and they all want sex. So she offers to skip the candlelit dinners and go straight upstairs to unwrap him like a birthday present.

Jack and Elise negotiate a deal—they’ll alternate his romantic dates with her “sex only” dates. The contract works… until both of them get more than they bargained for. As Jack puts it, “falling in love isn’t for the faint of heart!” Can two legal eagles make this relationship work?

I don't even have the words to describe how much I loved this book. The characters were smart and funny and easy to fall in love with and relate to. Magdalen Braden does a great job of crafting a story that at first seems absurd, but quickly sucks the reader in and becomes easily believable. I have never read the previous two books (but absolutely will be now!), and this was easily read as a standalone.

In her series of sexy contemporary romances, The Blackjack Quartet, Magdalen Braden writes about lawyers, judges, law students, paralegals … an entire fictional Philadelphia legal community, in fact. Hey, she left her legal career to return to her first love, romance writing, so it makes sense she'd write about the law. As she puts it, "I needed a day job to quit, so I went to law school."

Be glad she doesn't draw on her other professional experiences, which include failed caterer, failed daycare administrator, failed editorial assistant, and failed hearing tester in a flour mill.

Magdalen writes about Philadelphia because she went to law school there, practiced there, and even has a British patent attorney ex-husband still living in the Victorian South Philadelphia house Magdalen bought before they married. (The house used to be part of a convent—another aspect of her past that won't show up in her steamy novels.)

In a shameless bid for attention, Magdalen has been known to tell people she and bestselling author Julie James have virtually identical legal careers: Magdalen went to a better law school but Julie had the better federal clerkship.

In addition to writing, Magdalen keeps busy completing her Masters in Fine Arts degree from Stonecoast, the University of Southern Maine's MFA program, one of only two in the country that acknowledges romance novels exist, let alone comprise a wildly popular fiction genre. She even submitted a scholarly essay on Susan Elizabeth Phillips' "Dream a Little Dream" in her first semester. What time Magdalen has left over is spent with her second British husband (what can she say? She has a type!) in their two-hundred-year-old house in rural Pennsylvania with their cats and dog.

Magdalen's debut romance, "Love in Reality", begins The Blackjack Quartet. Book three in the series, "Blackjack & Moonlight", was a 2012 finalist in the prestigious Romance Writers of America Golden Heart® contest and will be published in 2013 after "The Cost of Happiness" (Book Two) and before "Lost and Found" (Book Four). There are rumors she's even considering a fifth book in the series.