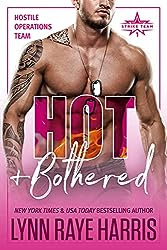 He can never have her. Having her means the end of his career in the Hostile Operations Team. But when he learns she's carrying his child, he'll have to make a choice...
Ryan "Flash" Gordon has been drawn to Emily Royal bin Yusuf since the first moment he met her. But she's a terrorist's widow, which means she's completely off-limits. A HOT special operator can never be with a woman whose name is on government watch lists the world over.
But when Emily begs him for just one night, he can't refuse. The next morning, she's gone. Not just from his bed, but from his life.
Emily can never clear her name--or can she? When a rogue CIA operative offers her a chance to put her past behind her and do something for her country, she leaps at the opportunity--even though it means leaving behind the man she's fallen in love with. But not before she lets herself have one night with him.
One night with stunning consequences...
The Hostile Operations Team is back in this thrilling new novel of suspense by a USA Today bestselling author!

Another great book by Lynn Raye Harris.  She continues to write great stories with interesting characters and puts a new and different spin each time on these special forces hotties!  Emily is a strong female character with just the right amount of vulnerability.  Ryan is a good guy just trying to do the right thing, and it was nice to read about a male hero who wasn't broken, just trying to be a good guy.

Lynn Raye Harris is the New York Times and USA Today bestselling author of the HOSTILE OPERATIONS TEAM SERIES of military romances as well as 20 books for Harlequin Presents. A former finalist for the Romance Writers of America's Golden Heart Award and the National Readers Choice Award, Lynn lives in Alabama with her handsome former military husband and two crazy cats. Lynn's books have been called "exceptional and emotional," "intense," and "sizzling." Lynn's books have sold over 2 million copies worldwide.
You can learn more at her website, www.LynnRayeHarris.com, or come and visit her at her Facebook page: http://www.facebook.com/AuthorLynnRayeHarris. Lynn loves hearing from her readers! To sign up for Lynn's newsletter--where you'll be kept up to date about all of Lynn's books--text the word HOTTIES to 33733.