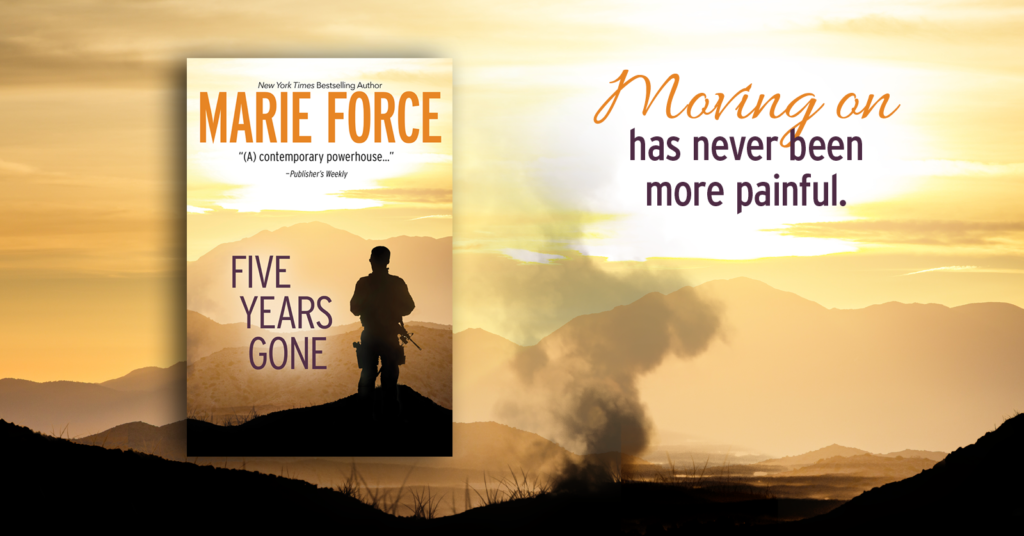 Today we are celebrating the release of FIVE YEARS GONE, a romantic standalone title by New York Times Bestselling author Marie Force. Check out some teasers and an excerpt for the book below. 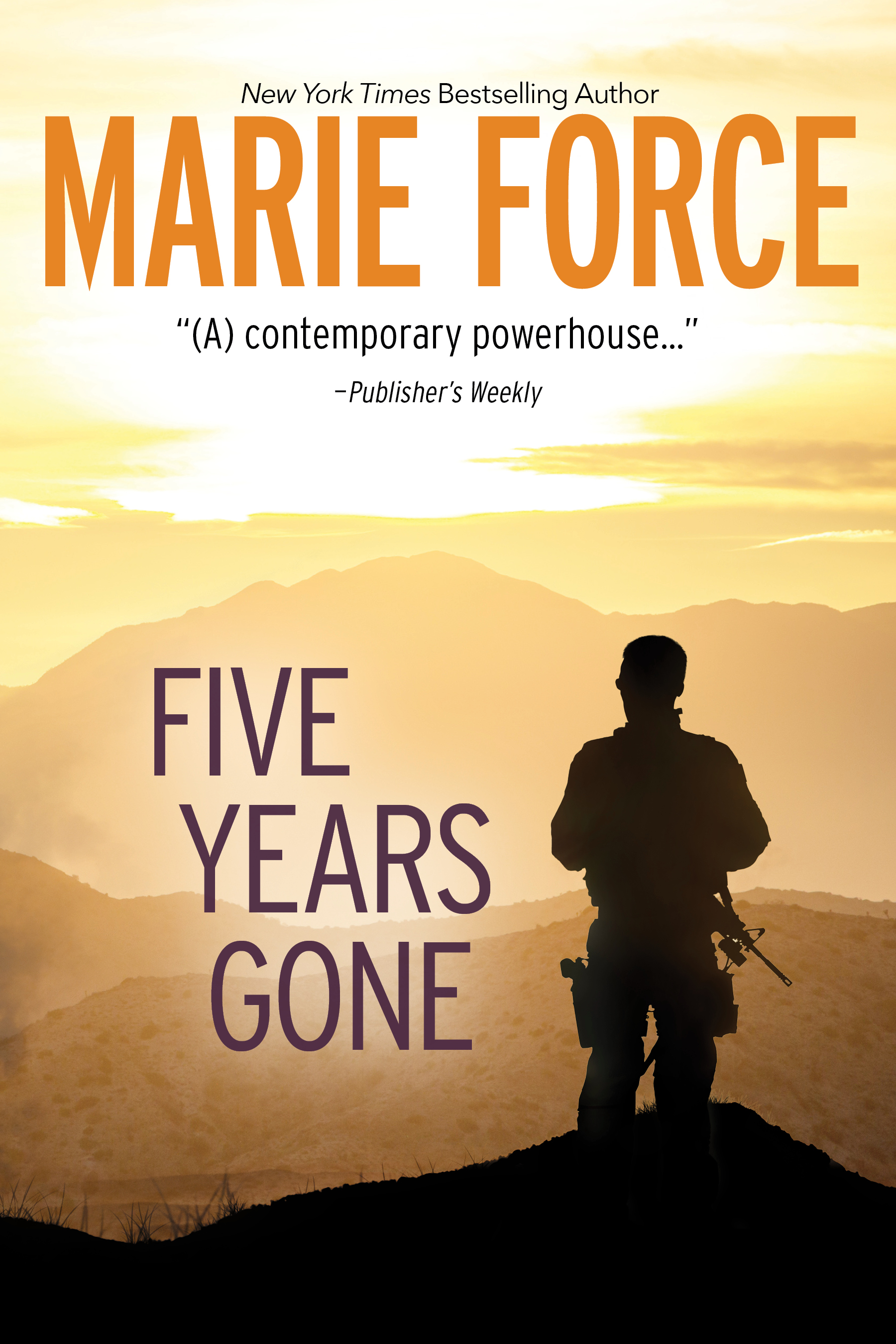 The most brazen terrorist attack in history. A country bent on revenge. A love affair cut short. A heart that never truly heals.

I knew on the day of the attack that our lives were changed forever. What I didn’t know then was that I’d never see John again after he deployed. One day he was living with me, sleeping next to me, making plans with me. The next day he was gone.
That was five years ago. The world has moved on from that awful day, but I’m stuck in my own personal hell, waiting for a man who may be dead for all I know. At my sister’s wedding, I meet Eric, the brother of the groom, and my heart comes alive once again.
The world is riveted by the capture of the terrorist mastermind, brought down by U.S. Special Forces in a daring raid. Now I am trapped between hoping I’ll hear from John and fearing what’ll become of my new life with Eric if I do.
From a New York Times bestselling author, Five Years Gone, a standalone contemporary, is an epic story of love, honor, duty, unbearable choices and impossible dilemmas.

Five Years Gone is an emotional story however what I like best about the way Marie Force crafted and told this story is that I wasn’t crying the whole time I read it.  There were definitely times where my chest would tighten-up as I felt the impact of a story twist on a character but I was able to continue reading without being distraught over what could have been an overly emotional moment.  I am so grateful for this.  I do not enjoy having my emotions twisted all over when I’m reading a book and Marie does a good job of keeping the emotions with the characters where I could feel empathy for them without feeling the emotion itself.

There is so many good things happening in this story.  Ava’s journey of self-discovery could have been a book all on its own, as could Eric’s journey which is less detailed in the book but still there.  Ava and Eric’s romance is written as a thing that is happening along with Ava and Eric’s individual journey’s which makes the story feel authentic in a way few authors are able to truly capture.

This book is so much more than just a romance and I could easily recommend this book to anyone who wants to read a well written emotional story with developed characters and a complex plot. 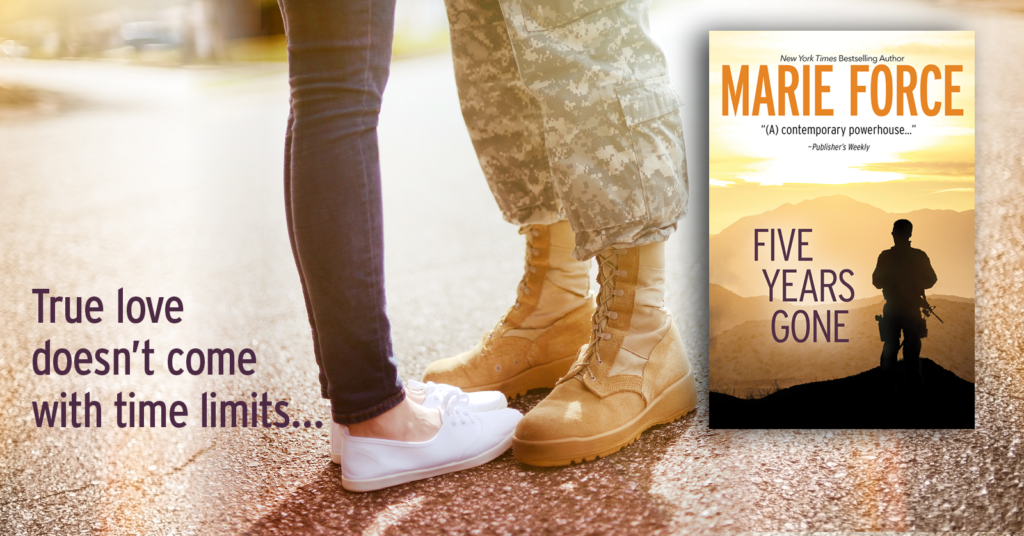 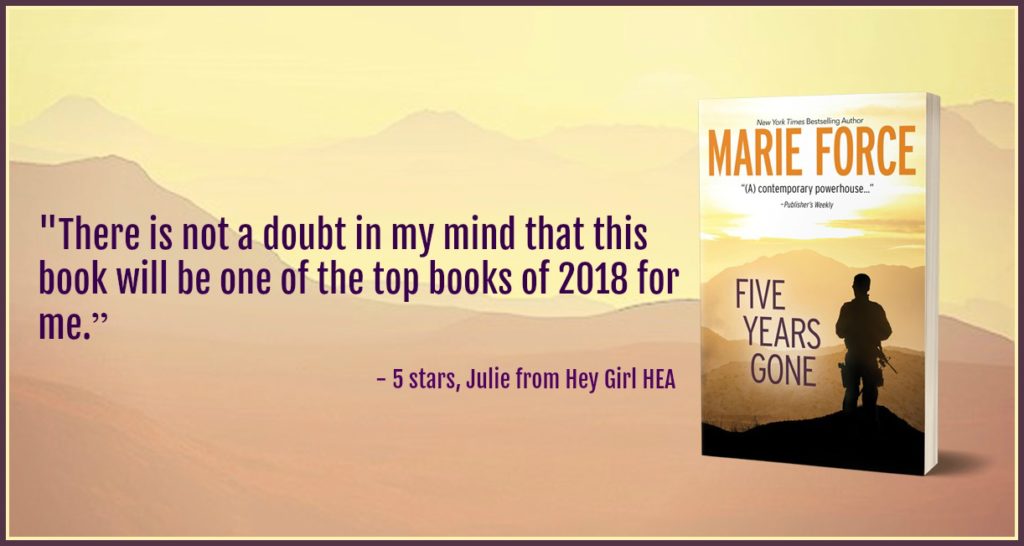 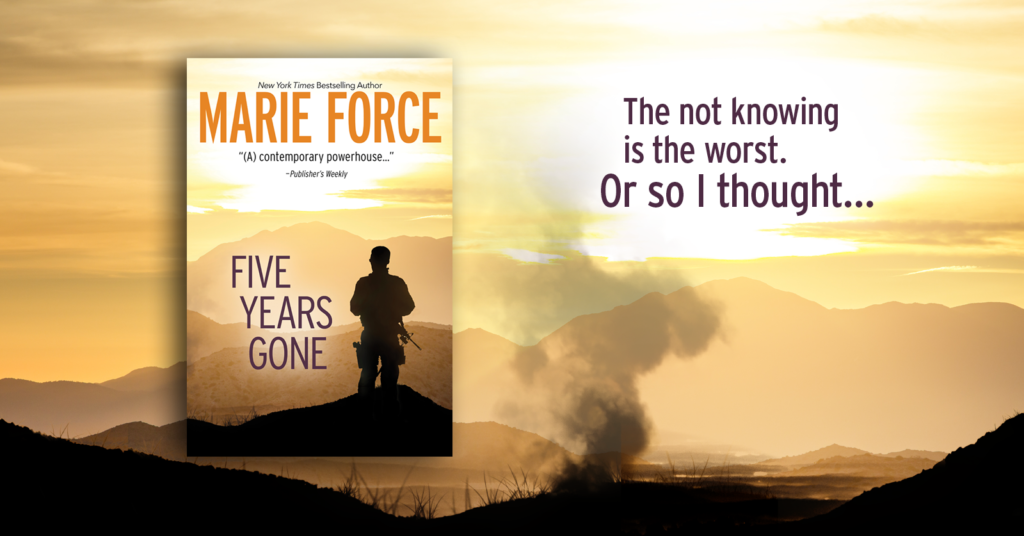 Marie Force is the New York Times bestselling author of contemporary romance, including the indie-published Gansett Island Series and the Fatal Series from Harlequin Books. In addition, she is the author of the Butler, Vermont Series, the Green Mountain Series and the erotic romance Quantum Series. In 2019, her new historical Gilded series from Kensington Books will debut with Duchess By Deception.
All together, her books have sold 6.5 million copies worldwide, have been translated into more than a dozen languages and have appeared on the New York Times bestseller list many times. She is also a USA Today and Wall Street Journal bestseller, a Speigel bestseller in Germany, a frequent speaker and publishing workshop presenter as well as a publisher through her Jack’s House Publishing romance imprint. She is a two-time nominee for the Romance Writers of America’s RITA® award for romance fiction.
Her goals in life are simple—to finish raising two happy, healthy, productive young adults, to keep writing books for as long as she possibly can and to never be on a flight that makes the news.
Join Marie's mailing list for news about new books and upcoming appearances in your area. Follow her on Facebook, Twitter @marieforce and on Instagram. Join one of Marie's many reader groups. Contact Marie at marie@marieforce.com.