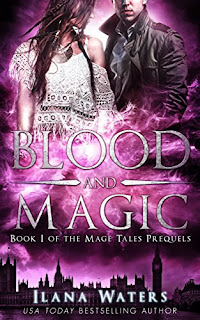 ABOUT THE BOOK
Bloodseeker Titus isn't looking for trouble-just a quick meal, but when his path crosses with witch Abigail's that plan gets shot to Hades.

Abigail is a member of the Paranormal Investigation Agency (PIA), a secret organization that can spell death to supernaturals.  Titus vows to stay as far away from her as possible.  But when Abigail suspsects a high-ranking PIA member of a monstrous plot, she vows to investigate.  For that, she needs Titus's special skills.   Against his will, Titus is swept into a world of exploding gas mains, lethal bird shifters, and sadistic vampire minions.  The only way out?  Uncover the PIA's murderous secret.  Which means going up against the power figure at the center of it all.  The only problems is, that person will stop at nothing to get what they want.  Even if that means destroying every supernatural in their path.

REVIEW
Blood and Magic is the first book of the Mage Tales Prequels series, and I would tell you the exact moment I realized this was a YA book and not one of the typical books I review here, but I was pretty much at the end of the book at that point.  Jenn HATES reviews with spoilers, but by the final showdown exactly zero people had lustily removed their clothing and the only thing passionately consumed was a couple of veggie samosas.  Not that I can blame Abigail for that.  I love me some Indian food.

Set in the early 1980's, which the intro tells us is the dark ages of humanity before cell phones or the internet.  Weirdly, the setting didn't impact the story to any degree other than the heroine looking for a pay phone at one point.   There are  talks of libraries but also that supernatural folks like things old school, and Google hasn't gotten around to scanning the full library of random paranormal societies that catalog supernatural events for no real reason other than being weirdly voyeuristic.  We did see some people in punk clothes, but this is London.  There are still punks there right now.  The only other nod to the time was that the villain has a signed photo of Margaret Thatcher on their desk, because it may as well have been a big flashing sign saying "VILLAIN SITS HERE."

The author's website notes that she likes blended characters, and that is clearly apparent from her characters here.  Abigail is a spunky Jewish baby witch hippy midwife from New York.  Titus (don't say Andromedon....don't say Andromedon) Aurelius is an ancient Roman general witch vampire hybrid.  I almost quit after the first couple paragraphs with strong inward groans and shouts of "BUT BEER DOESN'T CATCH ON FIRE."  Of all of it, the characters were not the strong point.  There were well thought out details.  Nods here and there to what they were supposed to be.  But there just wasn't much there there.  Titus, who is intriguing in concept, falls flat.  I guess at leas he didn't sparkle.  One or two endearing moments from Abigail and some strong action sequences redeemed a book that could otherwise be various shades of deep blue gray watery violently translucent forgettable.


ABOUT THE AUTHOR
Ilana is a USA Today best selling author of the Mage Tales and specializes in fast paced, snarky YA urban fantasy novels.