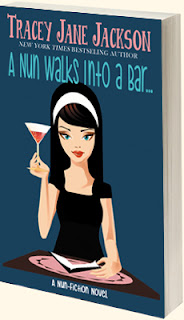 After growing up in an abbey, orphan Sadie Ross becomes Sister Abigail Eunice. Her life and career are on track until a chance meeting with a handsome stranger in a place no nun should ever go.
Ryder Carsen’s sister is missing, and he doesn’t have time for distractions. But when a pretty nun walks into his bar, he can’t ignore his attraction to her, even though she’s not the “sister” he’s looking for. He’s relieved when she walks out of his life for what he believes is forever.

Sadie’s life takes a surprising detour when she finds her path crossed with Ryder’s once again. When they are brought back together, Ryder knows he’s found the only woman he’ll ever love, but time is running out for his sister.
Will Ryder save his sister from the men who took her?

When a source far too close to home threatens Sadie, will she trust Ryder enough to let him save her too?


REVIEW
Picking up this book for review had me a little worried, since you can go so horribly off the rails with anything even remotely nun related.  I think I was on the last page of the ebook before I would let my guard down.

The characters were likeable and human and at no point was their a sucker punch moment where a seemingly good and gracious religiously motivated person either turned on all their ideals OR turned out to be a secretly scheming villain out to rape an pillage the whole world.  A++, Jackson.  You win this round, but what about the story?

Being as Sadie is a nun as our story unfolds, that makes the scenes decidedly less steamy than in the typical novels we review, but I am compelled to still give this an 18+ due to the plot themes involving human trafficking.

Jackson manages to deal with the lack of (euphemistically) passion scenes well, and the story did not suffer from their absence.  I would much rather the characters stay true to their expressed ideals than do something grossly out of character.  Maybe my sensibilities are getting a little more tender in my old age.

For fans who like their main men burly yet sensitive and willing to wait, like Charlie Hunman in Sons of Anarchy only independently wealthy and with a much stronger vision of peoples innate human dignity, you will find a lot ot like about the romantic love interest.  Like Charlie Hunman in Sons of Anarchy, there is so much that is only okay here because he is super hot, wealthy, and somewhat vulnerable.  If you or your child or even close neighbor were to date anyone with the possession issues this guy has, GTFO.

Also, there is no way CPS or the FBI work the way they are described in the book.

If you're willing to set aside the relationship issues and the blatant disregard for governmental procedures, what you're left with is a well plotted and enjoyable read.

New York Times Bestselling Author, Tracey Jane Jackson, was born and raised in New Zealand, and that's where her love of horses was formed. Her grandfather taught her to ride at four years old, and she couldn't get enough.

Her love and passion for Abraham Lincoln and the entire Civil War era might have come from her American father, however, he lays no claim to influencing her. Tracey's mother used to tell her she was simply born in the wrong place in the wrong time.

Tracey hasn't always wanted to write. It took her a long time to get started, but now she doesn't seem to be able to stop, the joy of escaping to the 1860s is too much fun.

She's been happily married and gooey in love with her husband for more than twenty years. They live in the Pacific Northwest with their two sons.