What a Girl Wants (Fillmore & Greenwich Book 1) by Kate Perry

Sebastian Tate knows two things. One: Life is short. Two: Family is all that matters.

Which is why he left his successful advertising firm in New York to take a prolonged sabbatical in London . His days of being a high-powered mogul are happily behind him.

Until a former business associate calls in a debt. Reluctantly, Sebastian returns to San Francisco to help the man's daughter build her homegrown organic skincare company into an international brand.

But Ariana Warren isn't the spoiled little rich girl Sebastian expects her to be. Independent and smart, Ariana has distinct ideas about her business and life, and they don't include Daddy's help—or Sebastian's. In fact, Ariana doesn't want him at all. Which is a problem, because she's exactly what he wants. With Ariana pushing him away, Sebastian decides to put all his advertising efforts into selling her on the fact he's what she wants, too.


Summer Welles wants the fairy tale.
The illegitimate daughter of Reginald Summerhill, the Earl of Amberlin, she listened to her mother's stories about the Summerhill girls all her life. In her mind, Summer was part of the stories too—living in the castle, wearing fancy dresses, and falling in love with Prince Charming.
Her wish came true. Mostly. She lives in the Summerhill mansion. She has stepsisters—nice ones who don't make her clean the chimney. She even has a magical wedding dress waiting for her special day. The only thing missing is the perfect man.
She knows exactly who he is, and she's going to confront him at the annual Midnight Masquerade Ball. What Summer didn't count on was mistaking a masked frog for her prince.
Once she kisses the mysterious man, he won't go away. And he's not sweet or charming or princely. He seems more interested in ravishing her rather than riding off into the sunset with her, and—worse—she's tempted to let him.
Her fairy tale at stake, Summer's faced with her own quest that neither frog nor prince can rescue her from: sacrifice her Happily Ever After, or turn her back on the one man who makes her feel alive?

What a great start to a new series by Kate Perry!  I love how each series spins off from a character in the previous series and how each take place in the same world, but the reader doesn’t need to have read the previous series in order to enjoy this one.  When we last saw our hero Sebastian, he was going back to America to help a former client.  We soon learn that the former client is the Heroine Ariana’s father, and that he is being sent to “help” her grow her business.  The story flows easily as they two become friends and it is refreshing to have a guy who isn’t an alpha male be the pursuer.


If you are looking for a light-hearted, fun, and comical summer read, this is the book for you.  And if you aren’t already familiar with Perry’s books, I highly recommend you go back and read those as well, everything she writes is worth reading. 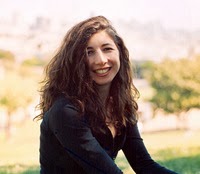 Kate has tangoed at midnight with a man in blue furry chaps, dueled with flaming swords in the desert, and strutted on bar tops across the world and back. She’s been kissed under the Eiffel Tower, had her butt pinched in Florence, and been serenaded in New Orleans. But she found Happy Ever After in San Francisco with her Magic Man.

Kate’s the bestselling author of the Laurel Heights Novels, as well as the Family and Love and Guardians of Destiny series. She’s been translated into several languages and is quite proud to say she’s big in Slovenia. All her books are about strong, independent women who just want love.

Most days, you can find Kate in her favorite café, working on her latest novel. Sometimes she’s wearing a tutu. She may or may not have a jeweled dagger strapped to her thigh...