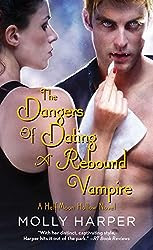 
In the next book in Molly Harper’s beloved Half Moon Hollow paranormal romance series, Gigi starts her first job (at Vampire Headquarters), gets over her first love, and may even fall for her first vampire!
Gigi is no longer an innocent teen. All grown up and looking for love, her family and friends worry she’ll go for the sexy, alluring vampire instead of a nice, safe human. But sexy and alluring, with a penchant for biting, could be just what Gigi wants...

I love Molly Harper’s writing style and the way she incorporates pop culture references throughout her books.  This book was no exception and had me smiling and laughing throughout.  While the romance between Gigi and Nick felt a little rushed, there is so much going on in this book that it is understandable considering everything that needed to happen.  The story was well done and fast paced.

Molly Harper worked for six years as a reporter and humor columnist for The Paducah Sun. Her reporting duties included covering courts, school board meetings, quilt shows, and once, the arrest of a Florida man who faked his suicide by shark attack and spent the next few months tossing pies at a local pizzeria. Molly lives in western Kentucky with her family.